The Island of Eilean Mor MacCormick 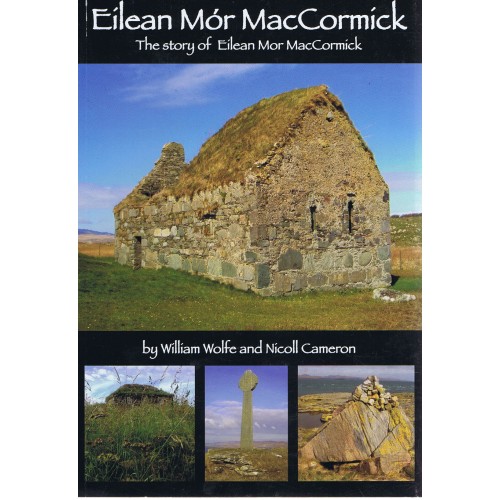 The book is in three parts by Billy Wolfe and Nicoll Cameron which are complimentary. Eilean Mor Maccormick cannot be considered in isolation.﻿ In the first book Billy Wolfe writes about its role in relationship to what is happening in the rest of Scotland, and the artefacts which date back to the 6th century.
The next books by Nicoll Cameron covers topics including who was Cormac and where did he come from, the natural history, religious significance, astonishing voyages of Celtic Saints to the exploits of John Paul Jones (The founder of the American navy), and other famous visitors to the Island are also recorded. The final book gives the story of the work the trust has initiated accounts of the last swim of cattle to the mainland, an explosive device, the Island in recent times. It brings up to date the first hand accounts of the last swim of cattle to the mainland, an explosive device, commandos, early communication, an attempted foreign takeover, and other current events.
To purchase the book, pay by paypal to eileanmorsiopa@gmail.com .              Price including postage.
U.K.  Pounds 12.00                EU  Pounds 15.50         Rest of the world  Pounds  19.00
Also available at Scots Independent_____books_____non-fiction
Amazon,    Argyll Book Centre,  Lorne Street,  Lochgilphead,     The Post office Chalmers Street Ardrishaig
Shipchandler Shop,  Crinan Boat Yard